July 4, 2021 - druidlyclean
Tags:
announcementpatch
Happy birthday, Team Fortress 2 Classic! We sure hope you weren't celebrating the anniversary of anything else today, because the official release of TF2 Classic, along with The Death & Taxes Update, dropped exactly one year ago! It's been a long year for all of us, and while we're still hard at work on future content, we appreciate that so many of you have stuck around since release, and that so many more have trickled in this past year.

As a show of appreciation, we've gone back on the only unpopular update we've ever released: changing the VIP variant of Badwater from night to day! That's right, Badwater is night time once again! Originally, we brought back daytime to address visibility issues; some parts of the map, especially outdoors and under cliffs and balconies, were too dark and muddy without a strong source of natural light, and players' team colors could get lost in the shadows. With help from Savva (one of our community contributors), we've lit Badwater up enough to make players stand out, without ruining what made it look special. Below are example comparisons of each version, in order of when they were changed. 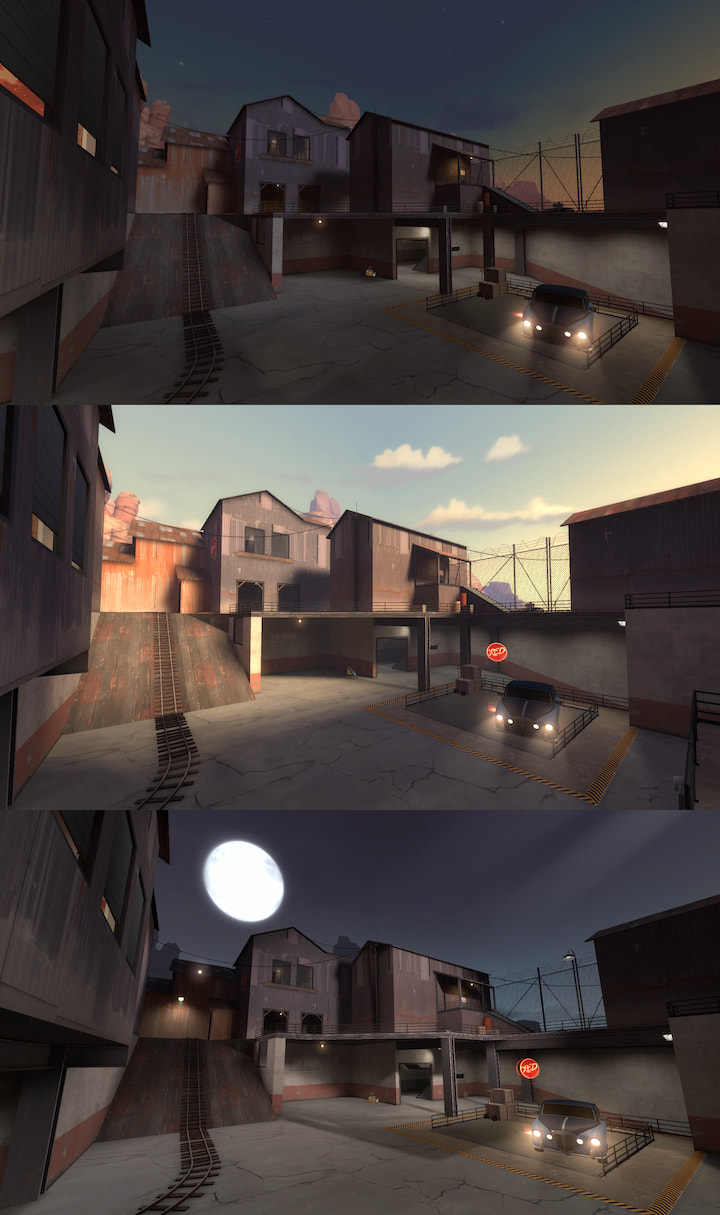 We know this isn't much on its own, and we can tell you're eager for more content. With our next update, you'll be seeing some proper new weapons and overdue quality-of-life features. Here's an album of sly teaser pictures, as if to say, "We promise we're working on stuff, please don't leave!" 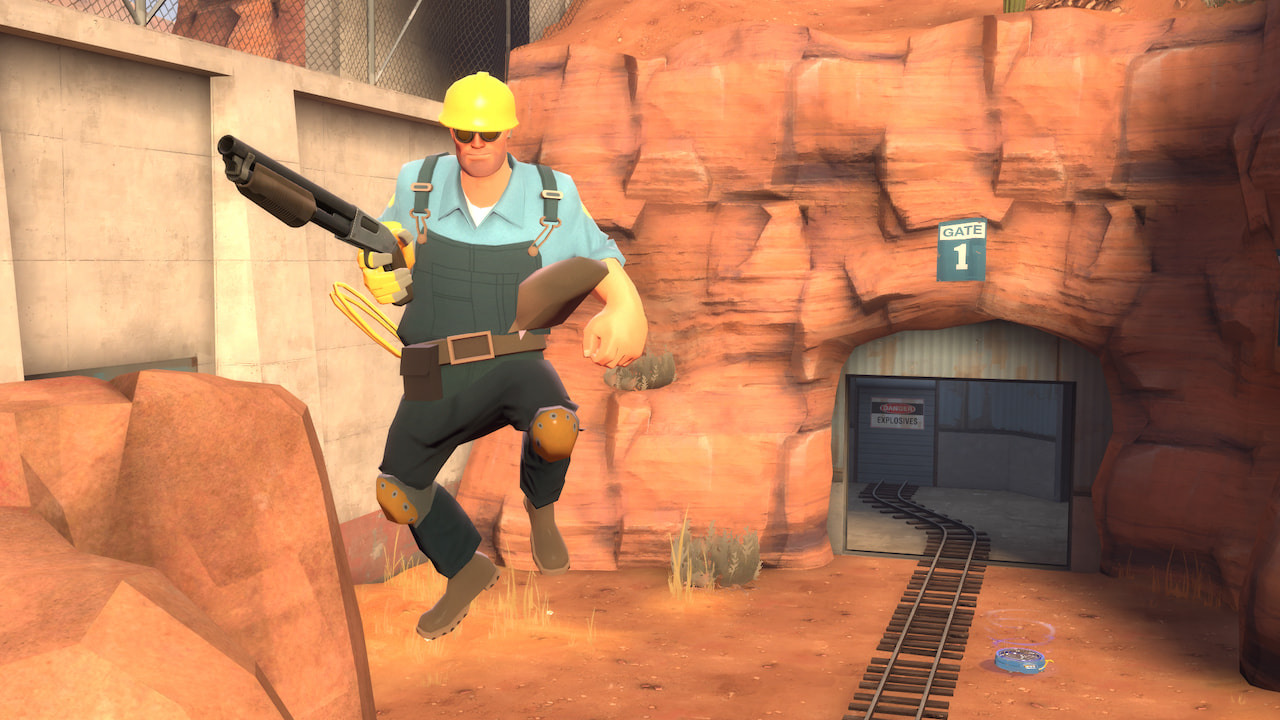 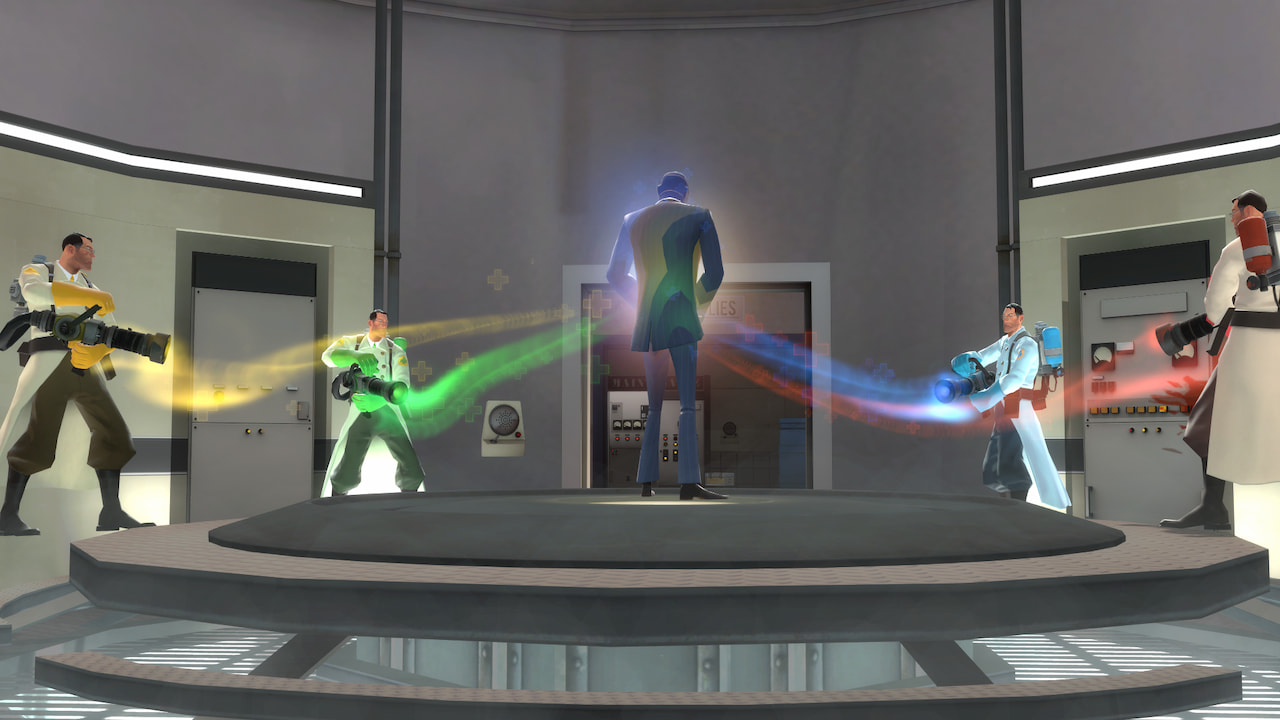 And don't worry, we're still working on maps. Do you love Four-Team, but find you've grown numb to Hydro and Flask? Then we've got bad news: between its freezing temperatures and its broken, mercenary-sized air duct system, this Antarctic map will probably leave you numb to the core! 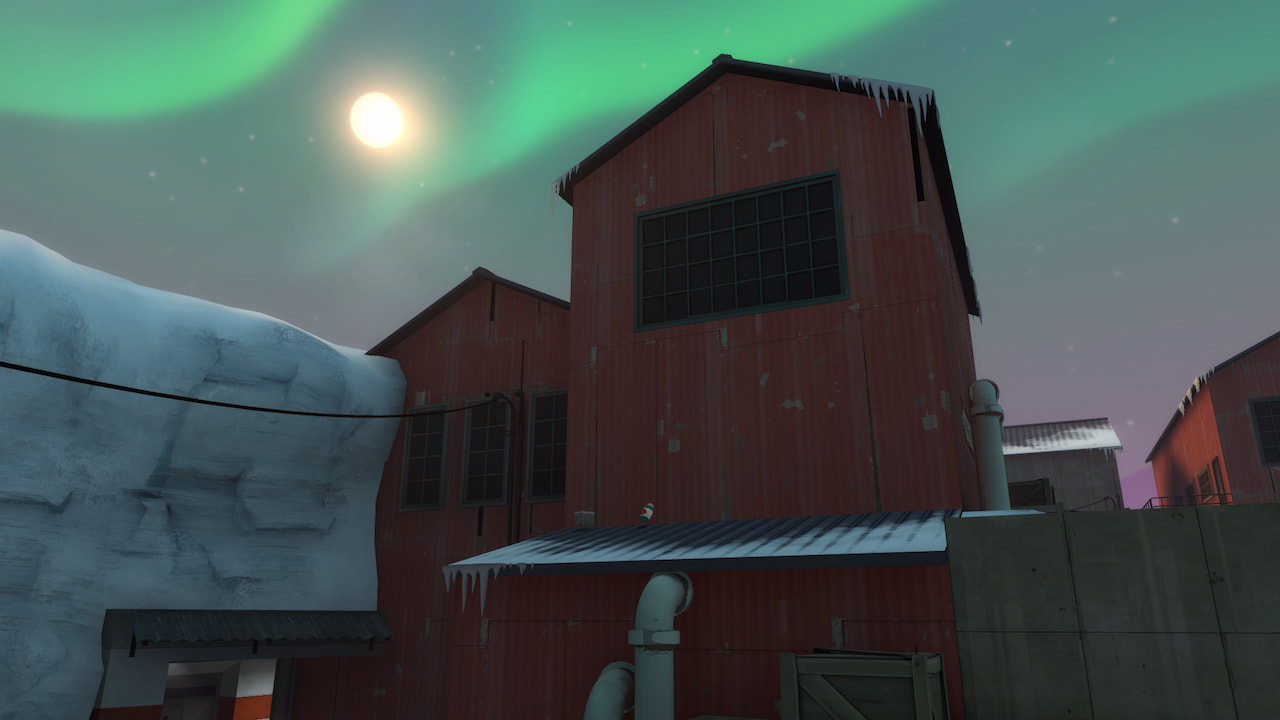 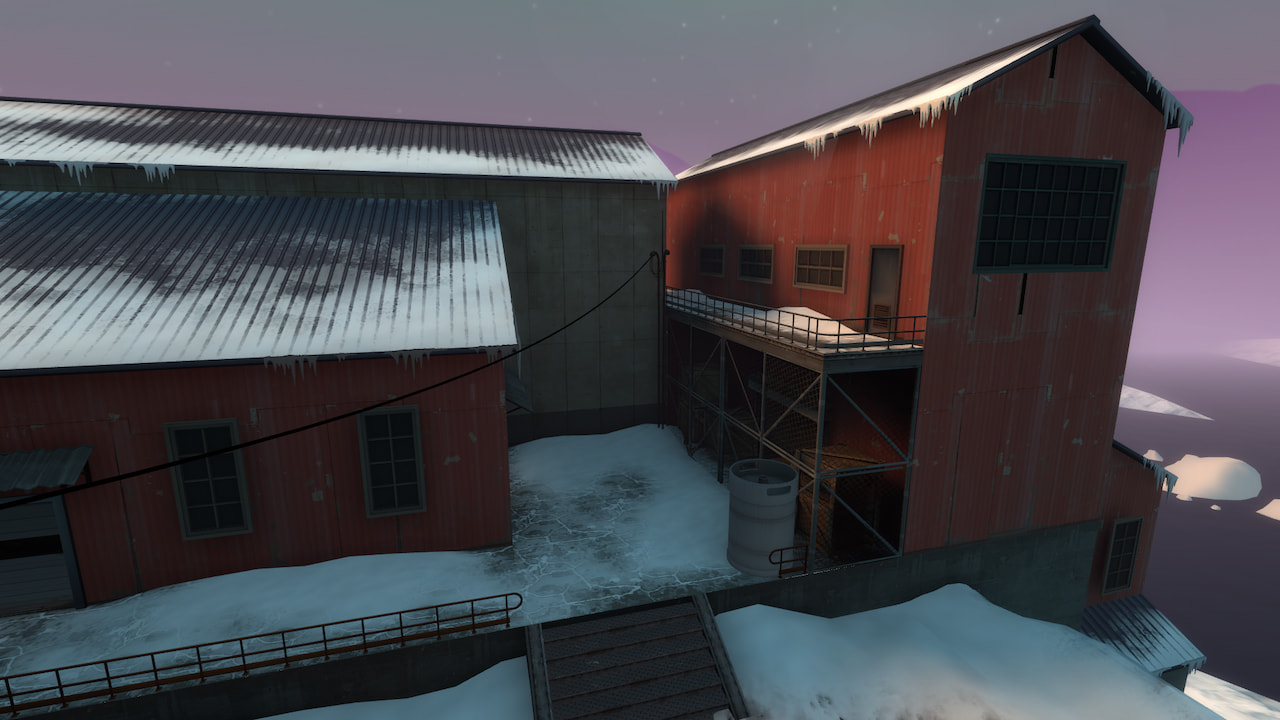 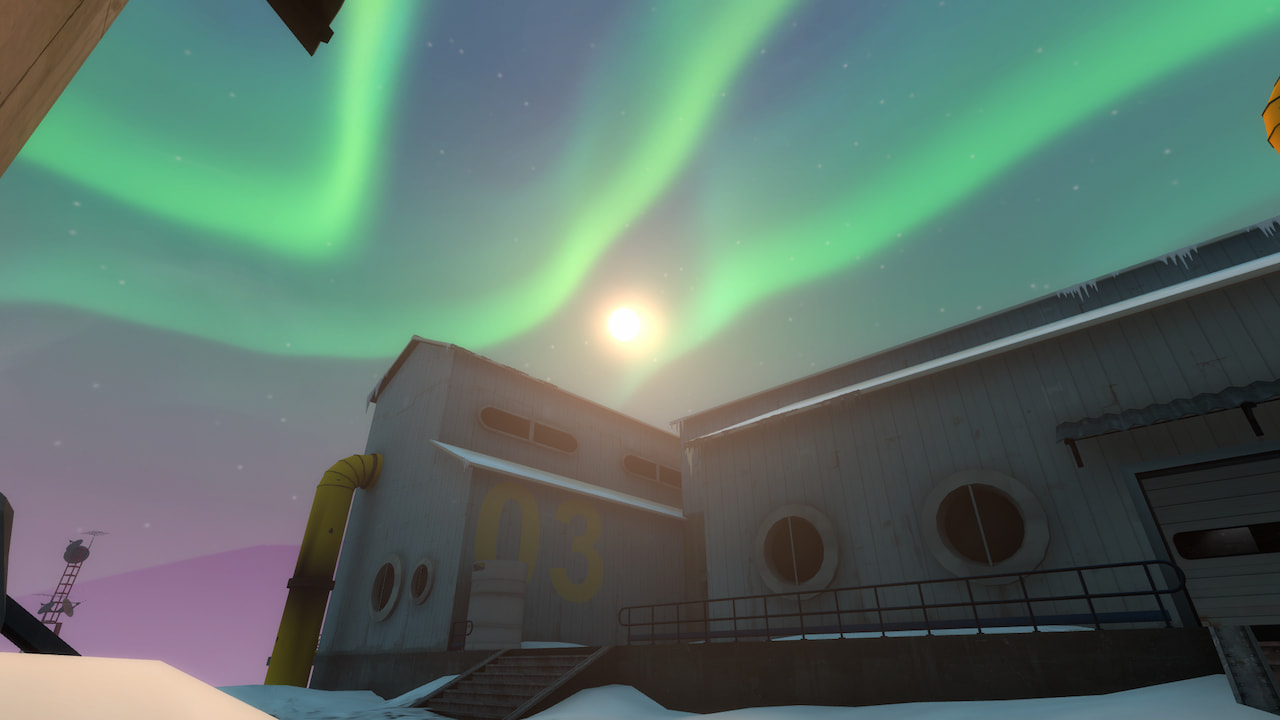 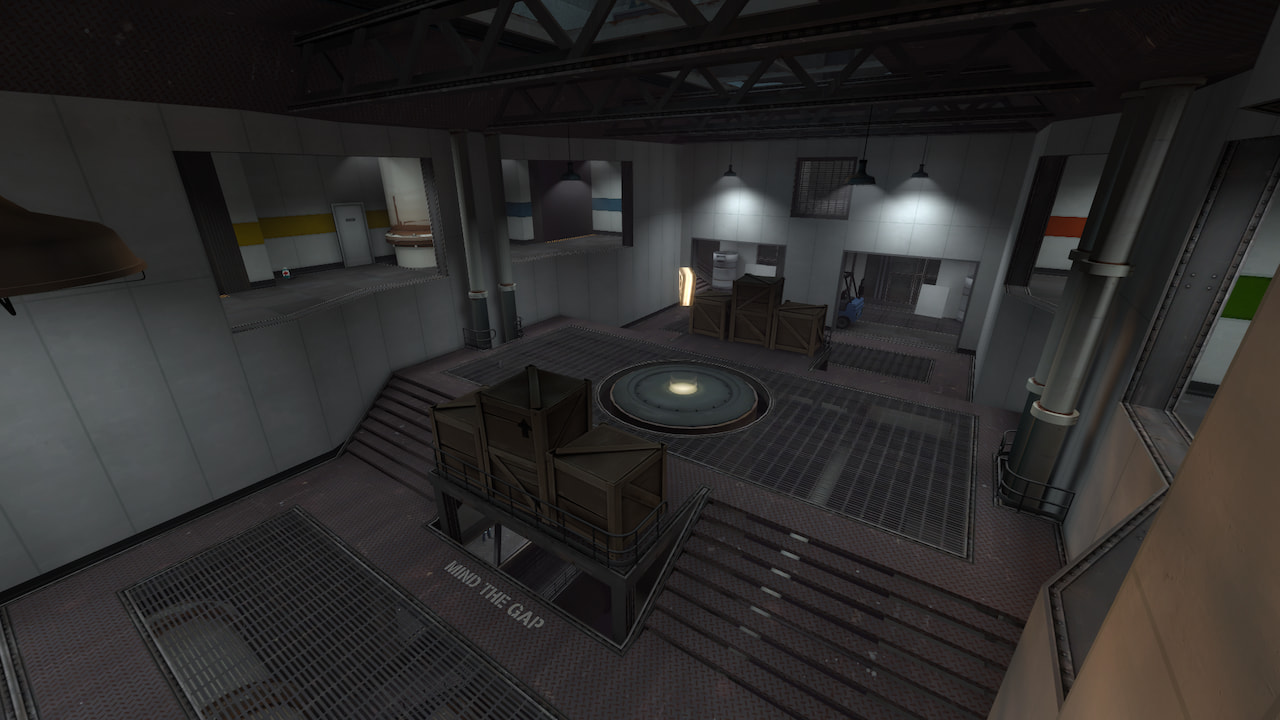 Let's be clear, again, the only content being added with this anniversary update is night-time Badwater. Everything else shown today is just a little taste of our mod's future. Happy birthday!

As far as future game-modes go, we're working on things internally, but we aren't ready to release any future plans or a road map yet. (This means "don't ask the developers about it when you see them in-game!") Just know that we haven't started work on the "Overpowered" game-mode yet. First, we want to drop a big update with content that'll last; we don't want to start working on Overpowered until we know that we can dedicate ourselves to it long-term, and that the community can be left alone for a while with the content they've got. With that in mind, stay tuned.

Here's to many more years, and many more updates, for Team Fortress 2 Classic. Thanks for being a part of this, and we hope you continue to be a part of our community while we work on future updates! 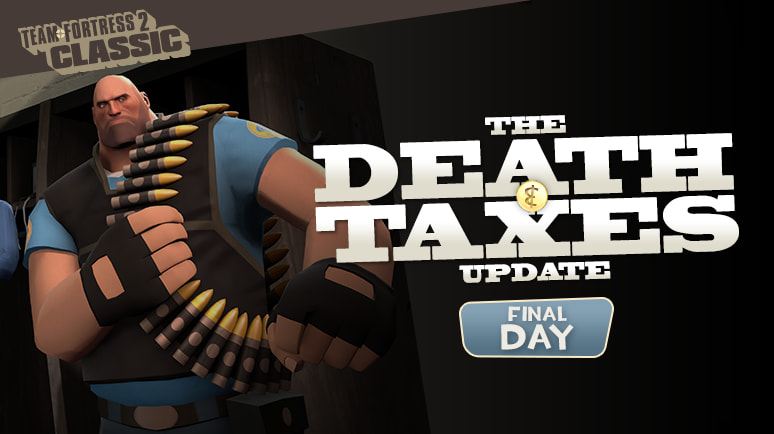 It's finally here! The moment you've all been dying for... or, will die for...

The release of Team Fortress 2 Classic, and the brand new update to ship with it, The Death & Taxes Update! It's finally here, and NOW we can let you use all those shiny new weapons and kill each other on all the brand new maps introduced in this update, all the maps returning from the past, as well as a handful from live TF2!

But don't forget to read the last page, as we've packed so much into day four that we can't explain it all in this blog post alone! There's even a few more weapons in there, ported from live TF2—just in case your baby hands need something familiar to grasp onto while other players are busy ripping you to bits!

Now when you're done reading, download the damn game! What are you waiting for!? It's out! Quit sitting on your hands, drag that cursor of yours, and install the freakin' mod!

Q. Where can I download TF2 Classic?
A. You can find the download link on our website, https://tf2classic.com/download. Previous version downloads of Team Fortress 2 Classic have been removed, and the project has shifted direction. Those versions no longer reflect the goals of the project.

Q. What is TF2 Classic now?
A. Team Fortress 2 Classic is a free mod that re-imagines the 2008/2009 era of the original Team Fortress 2, which we consider to be the "classic era". It contains features ranging from old scrapped mechanics to entirely new content, such as new weapons and gamemodes like VIP, Domination, and Four-Team.

Q. Why has the update taken so long?
A. Deathmatch was a huge undertaking, needing a lot of work that couldn't have been done within the years we were developing it.

Q. Where is Deathmatch?
A. Deathmatch has been split off from Team Fortress 2 Classic, and is now being developed as standalone game titled 'Team Deathmatch Classic' by Compucolor Pictures.

- It was too large; it felt like its own separate game. Any gamemode that disables classes/weapons to function goes against some of the core principals of Team Fortress

- The code between the two entities was getting to the point where if we did one thing in X, it'd screw something up in Y.

- The games can now be developed simultaneously (no more long waits).

Q. Are there new weapons in this update?
A. Yes, both reprisals of beta weapons and new creations.

Q. Does the mod still have Four-Team?
A.Yes. We currently have two official Four-Team maps, and all gamemodes are supported by Four-Team for the community to use.

Q. Will Espionage be made for TF2 Classic?
A. No, but the concepted characters will all be eventually released. As for why it won't be developed: like with Deathmatch, any gamemode that disables classes/weapons to function goes against some of the core principals of Team Fortress 2. Every gamemode we are currently working on involves all 9 classes without any restrictions.

Q. Will there be cosmetics or anything of the sort in TF2 Classic's future?
A. No.

Q. Is there lore in TF2 Classic?
A. We consider the original lore of Team Fortress 2 from before 2009 to be the primary basis of our lore. Beyond that, the only other lore we carry over from live TF2 is from lore the class bios from the official TF2 website and most Meet the Team shorts. Pyroland is retconned and does not exist within Team Fortress 2 Classic. As for our own lore, any official canon would be given out through maps, voicelines, shorts, update pages, and our own blog posts.

Q. Will there be a competitive side to TF2 Classic?
A. Not officially. We see Team Fortress 2 Classic as a purely casual mod. We do however have support for Highlander.

Q. Are there TFBots in TF2 Classic?
A.Yes, we have TFBots which are completely reverse-engineered. They are vastly improved upon to allow for better gameplay, and are currently able to play on 75% of our maps and gamemodes.

Q. Is there Linux and Mac support?
A. Currently, only Windows and Linux are supported for TF2 Classic. Mac is not officially supported, due to 32-bit applications becoming obsolete in recent years.

Q. Will there be more updates after this one?
A. Yes. They won't take as long.